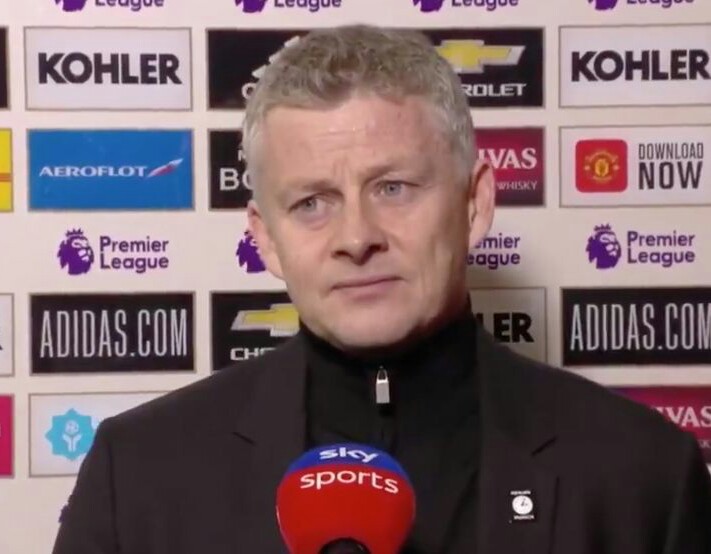 Manchester United manager Ole Gunnar Solskjaer has claimed that the Reds are not aiming to win the title this season, but Jamie Redknapp insisted he is wrong after saying they ‘should be believing’ during a ‘unique’, Covid-hit Premier League season.

Although Manchester United have shown vast improvements this season and were top of the table not long ago, they let more points slip after conceding a late equaliser in a thrilling 3-3 draw with Everton.

Solskjaer’s side’s impressive first half of the season and dwindling form of other sides led many to talk about them as title contenders, but the manager strongly denied the notion that claiming the crown was their aim this season.

Following the draw at Old Trafford, Solskjaer told Sky Sports: ‘We’re not talking about winning titles, we’ve come a long way this team, and we shouldn’t have been considered as title contenders. We’ve got to be better as a team and see where we end up.’

Redknapp, working as a pundit, immediately questioned Solskjaer’s claims, claiming the second-placed side should be dreaming they can claim the top prize as the unique season caused by Covid-19 continues to disrupt sides.

‘They should be (aiming for the title), this is a unique year, you’re not gonna have a better chance. Liverpool have lost players,’ said Redknapp.

‘Going forward this United team should be believing. This is the year anything is possible. They’re not kids are they. They’re full of experience. He should be telling this team believe you can do it.

‘City are by far and away the best team, but they might have a blip still.’

Scott McTominay had put United back in front after letting a two-goal lead slip against the Toffees before Dominic Calvert-Lewin slid home in the fifth minute of stoppage time.

Last season’s champions Liverpool are one side that have felt the effect more than most of the extraordinary campaign, as they sit seven points adrift of the summit already.

After a run of 10 wins in 12 games, United have seen their form stumble in recent weeks after a defeat by Sheffield United and draws against Arsenal and Everton, but did score nine in demolition of Southampton in midweek.

Chelsea vs Man United: They want to hurt us – Thomas Tuchel

Haaland speaks on the three EPL clubs he could join, Chelsea not included